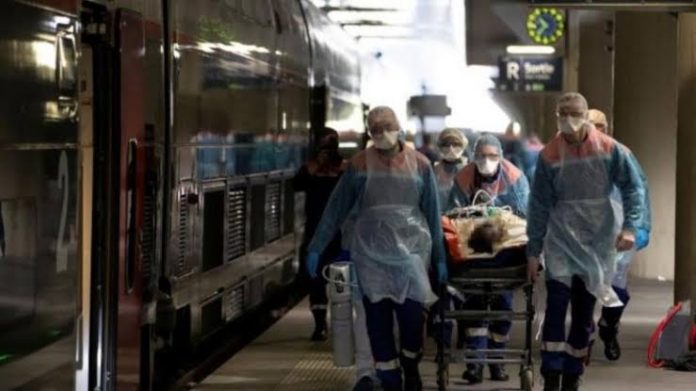 Good news comes in from the UK, they have moved to coronavirus alert level three from four, as the coronavirus cases have been seen to decline gradually, the announcement has been made conjointly by the chief medical officers.

The Health Department has cautioned the nation, “reducing to level three does not mean we have no threat of virus anymore, the virus still exists in the country, we should have to take precautionary measures to entirely eliminate it from the country.”

The chief medical officer of the UK said the decision of moved the alert system level to three from four was done after the recommendation by the Joint Biosecurity Centre after a gradual decline in coronavirus cases in different countries such as Northern Ireland, England, Scotland, and Wales.

Previously the nation was in a condition where the threat of transmission of the virus was high or rising exponentially and the measure of strictly social-distancing was in place.

Now, level three indicates the COVID-19 epidemic is in general circulation and gradual relaxation of restrictions and social distancing rule is required to be implemented.

One of the officers at Health Department Matt Hancock stated the change was a good moment for the nation and it proved the government’s strategy had been effective throughout and was working.

In a joint statement, chief medical officers have said that they had observed the steady decline in COVID-19 cases in four of the nations including England, Northern Ireland, Wales, and Scotland and this continues.

“But that does not make you free from the pandemic, the virus is over our heads, and localized outbreaks probably will occur,” officers cautioned.

“We have surpassed the deadly situation, the virus is now under our control to some extent, all thanks to our people to make it possible with their efforts and we require people to continue to implement the issued guidelines to ensure this progress continues.”

Chief medical officers from four different countries said they had analyzed the piece of evidence before offering recommendation of shifting the alert level to three.

Mr Hancock said the change was “a real testament to British nationals’ determination to defeat the virus”.

Moreover, he said, “cases rate is rapidly lowering, thanks to all the efforts and determination shown by millions of people in health care and social care services, we are making the country stand on her feet once again.

The security alert level system was introduced by the UK’s Prime Minister Boris Johnson earlier in May. The system comprises five different levels that indicate the level of threat to the country from the so-called coronavirus.

Let us start to unveil what this alert system says about the severity of the coronavirus epidemic in order to make you comprehend how the UK moved to alert level three.

The level five indicates the spread of the virus is surging, and there is a risk healthcare services will be overwhelmed. At level four, the transmission is high or rising exponentially, restrictive measures particularly social distancing is in its place.

Level three is where the country is now placed, the phase where the gradual easing of restrictions can occur, this indicates the virus is in general circulation. Alert level two is when the number of infections due to coronavirus is much lower than in level three, and the little restrictions are needed to tackle the situation.

The last level, alert level one shows the COVID-19 is no more exist within the boundaries of the UK, entirely lifting the restrictions with routine international monitoring.

The alert level considered to be determined by the chief medical officers by analyzing these figures:

What Does Analysis Say?

Turning the alert level is big news to the British people but the risk is in its place, even a second wave of cases likely to be seen locally in the UK.

Moving to alert level three was decided after observing the steady decline in infections across the country. Lockdown has been an effective strategy to make this epidemic under control.

It could not be obvious whether the alert level and easing restriction are inter-linked, but the news forces the government to move to its third step of the original plan, in which resumption of hairdressers, pubs, and restaurants are included.

Alert level three will not decide the scale of risk so people should have to take care of themselves with precautionary measures, maintaining social distancing, be careful with where they go what they touch and see, practicing good hygiene, as the alert level can go up or down depends on how people regulate the measure as they did before.

WHO Revealed Another Fact

Another revelation introduced by the World Health Organization saying, an asymptomatic person is not infectious means they can not help transmit the virus into a healthy body, great news we can say it is, but many of the authorities trolled this news and said, WHO had taken a U-turn after devastating the world’s economy by ensuring to implement social distancing rule.