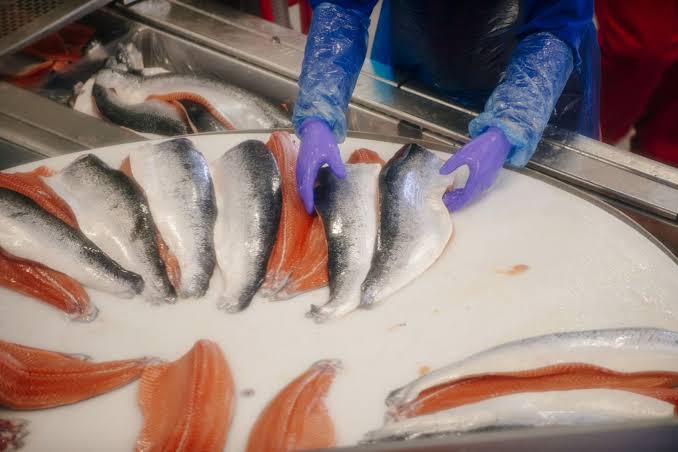 Beijing reported fresh cases of coronavirus, it seems a second wave of the outbreak has got into the country. But the strange thing is people thought this might have happened due to salmon selling in Beijing’s supermarket. Salmon panic created fear in Beijing.

All the new cases were linked with the wholesale market placed in the capital. A wave of fear created in the country when chinese media outlets reported the traces of the virus have been gathered from chopping boards used for cutting salmon fishes.

The scenario got worse after hearing the news, plenty of markets and restaurants had a quick move to remove the salmon from there and further imports of salmon were halted.

One of the workers at Supermarket Xinfadi market, who was supposed to clean the frozen salmon had tested positive for COVID-19, this firmed the belief of the community that the cause of spread is salmon.

However, China’s Centre of Disease Control declared it clearly this could not be the case in any way, it was not likely that salmon could become a host of the virus.

Let us Get Back to Catch the Root of the scenario

On June 11, China, particularly Beijing observed the first case of coronavirus after almost 58 days of declaring it a clear zone. Since then, they observed the spike in cases and 150 cases have been reported in Beijing alone so far, almost all the cases got the link to the capital’s supermarket.

Let’s have a look at the Xinfadi market. It is believed to be the largest wholesale market located in Beijing, about 80% of the vegetables and meat is supplied by the market and is used up by plenty of people. Visitors of the market count tens of thousands each day.

Many of the traces for the virus were collected from the cutting board used by the seller to cut the imported salmon.

40 of samples have been collected by the officials tested positive for the virus, some of them did not belong to chopping boards used for salmon, spokesperson for Beijing Municipal Health Commission made it obvious.

Here is a look at what Chinese officials of (CDC) have said about the link between virus transmission and Salmon.

One of the officials at the Chinese Centre of Disease Control made it clear no evidence was found to prove the link between virus and Salmon, it is unlikely. After the examination, it was found that salmon was not a host or an intermediate host to coronavirus.

Another official at CDC stated salmon was found free from any traces of virus on it before taken to the market. This paves the way that the virus was already in the market, not on the salmon. Experts do agree with the statements that came from the CDC.

A virologist at Tsinghua University, Cheng Gong said, ” virus requires viral receptors to inject and infect the body cells, without these receptors they are unable to enter into the cells. All the effective study and evidence collected so far suggest fishes do not contain that type of receptors, they are only found in mammals.

Authorities could not reach the conclusion exactly what was the source of the virus. Moreover, chief epidemiologist at CDC, Wu Zunyou stated, “fishes are unable to catch the virus in their natural place of living, though they can probably be contaminated during transportation and capture.”

The World Health Organization has cleared, the virus could not be conveyed through foods and beverages to humans. Furthermore, it said coronavirus can not multiply itself in food, it needs human or animal as a host to get itself greater in numbers. Food packaging considered as ‘highly unlikely’ for the spread of the virus.

China imports approximately 8000 tons of frozen salmon from Chile, Norway, Faroe Islands, and Australia every year. Most of these countries do not see regular spikes in cases and Norway has made its position clear by saying its salmon was not the source of the virus.

After besetting the salmon panic, China has made a quick move to cancel the order of salmon from different countries, Norway was one of those.

Hong Kong’s Centre for Food Safety declared the16 samples of the salmon delivered from Chile, Iceland and Denmark were tested negative for the virus. This news will really help reduce salmon panic in Beijing.

China has received 83,325 cases since the outbreak began, and 150 confirmed cases in Beijing alone after a mass test.