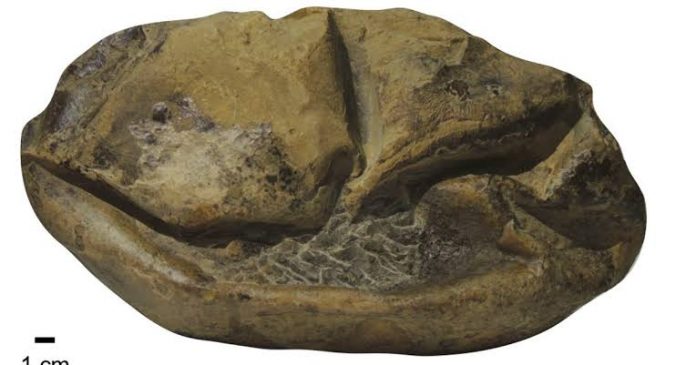 Scientists have now revealed the mysterious giant egg’s story that was uncovered a decade ago in Chile, Antarctica. Fossil egg is linked with a prehistoric giant marine reptile.

Researchers have spent many of the years just to unveil the truth behind this large-sized egg but could not find exactly what animal it belonged to.

The egg was discovered by the paleontologists in Chile in 2011 and kept in Chilean National Museum of Natural  History on display. At the time of discovery,  researchers did not know it was an egg. Later on, in 2018, a team of science experts from the University of Texas at Austin uncovered it could be a deformed football-sized egg.

After chemical analysis of nearby sediments around the shell made it more obvious that it is an original living tissue.

The most recent research regarding the fossil–which measures up to 11 by 7 inches–states the egg belonged to a giant sea animal, probably a  sea reptile such as snake or Lizard. The egg was considered to be the largest reptile egg discovered so far.

Though the egg’s size suggests it could be linked with the dinosaurs, the softness of the shell is paving another path that leads to the reptile class. Dinosaur eggs are believed to be covered with the hard shells according to many fossils study.

One of the researchers from Texas University at Austin stated, ” found fossil is probably similar to the Lizard and Snakes eggs, but the size of egg suggests it belonged to a giant relative of these animals.”

Further analysis of fossilized egg, suggests the animal that laid the egg would have been 7 meters long.

Though it was disclosed the egg that was laid 68 million years ago by a marine monster belonged to a giant sea reptile called mosasaur, it is still under the cover whether it was laid on land or at sea.