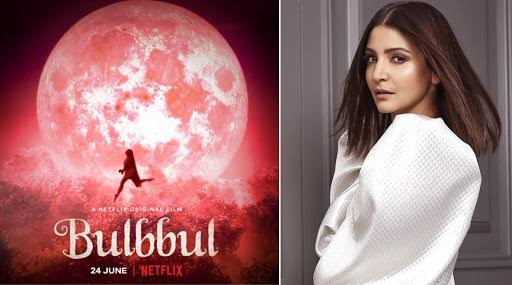 A teaser is out now for a Netflix film Bulbul under Anushka’s production company, the full movie is set to release this June on 24.

Here is a teaser of Bulbul out by Anushka in her tweet, she seemed so excited at the time of making a tweet about her Netflix film Bulbul. After receiving a bunch of appreciation for Video Prime web series, Paatal Lok, she has emerged with the first look of Bulbul and fans are eager to watch the full movie after it grabbed a look with its unique concept in just a single teaser.

Bulbul, a web film produced by Clean Slate Films, Anushka Sharma’s production company, will be set to break the web screens on June 24 and will be streamed on one of the popular web series streaming platforms, Netflix.

Central stars cast of the web series includes Avinash Tiwary, Tripti Dimri, Rahul Bose. In the teaser that Anushka shared on her Twitter handle, we get to see a girl jumping over the thick trees. She wrote:

Here’s your first look at #Bulbul, a fantastic tale about self-discovery, and justice, wrapped in lore, mystery, and intrigue, coming soon on @NetflixIndia. Can’t wait to share more!

I know, after the release of the first teaser, people, specifically Anushka’s fan following, want to know more about the origin of the film. So let us start to unveil what we know about the film. Bulbul portrays the tale of two brothers and child-wife Bulbul, one of them named Satya is sent abroad for further studies, however, the other brother stays here in India. On returning to his homeland, Satya finds everything changed, his brother left his child-wife Bulbul, and Satya Finds her serving for the villagers over there. But he finds something mysterious about the village and that lady Bulbul, so he gets to decide to dig out the truth behind the scene. It is said, Bulbul has some supernatural powers.

Anushka has not disclosed any further detail about her web series other than this. This is considered as one of the eight projects Anushka’s production company has been working on. She has been enjoying her production field as by doing this, she can spend her valuable time with her In-Laws and a loving husband. Anushka keeps sharing her cozy photos and videos with her Insta-fam.