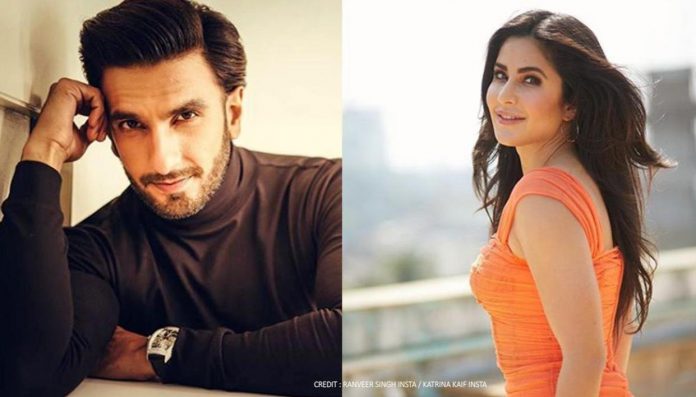 Men style icon and Bollywood’s versatile actor Ranveer Singh and Barbie Doll Katrina Kaif are rumoured to be teaming up for Zoya Akhter’s next movie.

Apart from film related work, producing and directing entertainment packages for public, Bollywood is also known for its match making when it comes to pairing up certain individuals to work along, either making them a Hit duo, or probably changing the opinion of viewers about liking that supposed to be a Hit duo incase if they are not galvanized by that pair.

Zoya Akhter an Indian film director and scriptwriter has said to bag up two well-known names in her next film that revolves around a gangster’s life and all goods and bads in it, with a dark, valiant and plucky set up she might be able to tantalize and woo the audience with such dramatization. Her supposedly hit duo who are going to share this silver screen for the first time are none-other than Katrina Kaif and Ranveer Singh. Katrina is said to be a close buddy of Zoya, and when this script was revealed to her she immediately said YES for the role.

Ranveer Singh who has previously done Dil Dhadakne Do and Gully Boy, would now be seen in this dark spaced reality driven film, with same locational concepts as his previous film Gully Boy. He accepted this offer and dates were being finalized, but were delayed due to this COVID-19 pandemic and the lock down that came along with it. Ranveer is said to solve and work out the dates for the films he previously agreed on for rolling, and then he’ll move forward towards Zoya’s offer.

About the duo, it is said that they are to be romantically paired in this upcoming film, with Katrina having a powerful role and interesting character contrasting the character given to Ranveer, indulging themselves in a life of a Gangster, let’s see what surprise and performance do we get to see, with such big names tagged along in this practical film.

Besides this film Katrina Kaif is said to be seen in Sooryavanshi and her upcoming superhero film with Ali Abbas Zafar, while Ranveer has his Jayeshbhai Jordar and Takht on the schedule.