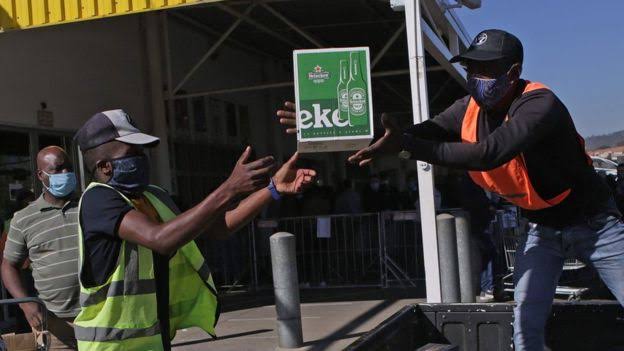 Alcohol consumers cheer as South Africa ease lockdown and lift up the liquor-ban, and eased the lockdown.

South African dwellers spotted lining up in the queue at alcohol stores after having ease in lockdown imposed for two months left the ban on alcohol sale and consumption.

The alcohol consumers filled up their trolleys with varieties of liquor to indulge once again with the smell of alcohol.

Ban on alcohol-sales was enforced lately in March to overcome the hospital burden and to ensure effective police-tackling to the prevailing situation countrywide.

In order to revive the economy in terms of the alcohol industry, authorities decided to resume the sales of liquor with looser restrictions, as South Africa is included in the list of highest alcohol-consuming countries.

Under the looser restrictions, consumption of alcohol will be ensured to limit at the houses, and the sale is set to continue for four days a week, from Monday to Thursday.

It was observed by the country’s medical experts that the ban on alcohol sales had impacted dramatically as it caused a dramatic decline in fatality rate amid ban.

However, on the other side, the liquor producing companies have seen a sharp loss in the industry’s revenue since the ban imposed on the industry.

“There is a significant amount of profit lost, we were losing turnover every day,” Jimmy Constantinou, a manager at a liquor store in Johannesburg’s Alexandra township, told Reuters.

Moreover, he added, “It’s obviously good that we’re open again but in terms of business it’s going to take a while to get there.”

The ban caused severe destruction in the alcohol industry with the cut of 117,600 jobs, said Rico Bason, a chief executive at wine manufacturing company Vinpro.

However, some of the prominent entities want the ban to stay. Leader of an opposition party, Julius Malema showed a strong disagreement with the government’s decision of lifting up the ban on alcohol consumption.

Mr. Malema expressed his sentiments against liquor sales, “Alcohol is destructive to many families, encourages rapes and assaults, alcohol endorses the unprotected sex that resulting in the spread of diseases.”

To endorse his stance against alcohol, many studies in South Africa have made it clear that alcohol is a destructive factor that eliminates peace in lives, and leads to murders and other criminal activities.

Many brewer stores have announced to offer home delivery service meaning, online pre-orders can be made to avoid rush and mass gathering at a place in order to comply with restrictive measures.

Moreover, school resumption has been delayed. Schools were decided to reopen from Monday but the authorities extended the return to the next week.