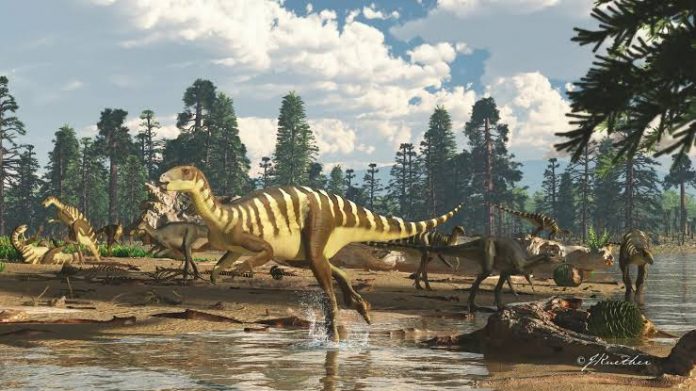 A new dinosaur has been unearthed in the continent of Australia, Paelentologists reveal.

A new discovery in the world of dinosaurs has been made by the paleontologists in Australia, this helps re-compile the history of species. Dinosaur is identified as rare because this type of fossil has not been unearthed yet according to the record of fossil discoveries.

Discovered fossil vertebrae of dinosaurs indicate its relation to Tyrannosaurus rex and velociraptors which belong to the theropod dinosaurs (carnivores) that were found on earth 110 million years ago, in the Cretaceous period.

They are named ‘elaphrosaur’, which suggests they are light-footed-lizards like dinosaurs. Much fossils of this type have not been unearthed so far.

Fossil experts have only unearthed a single bone of vertebral column at Cape Otway, Victoria, the first fossil of Elaphrosaur to be known in the continent of Australia.

At the time of discovery, this seemed to be categorized as Pterosaur, flying reptiles, but later studies by Swinburne University’s Ph.D. student Adele Pentland revealed it was a delicately-built dinosaur that belonged to another class of dinosaurs.

Elphanosaurs have unusually long necks, very short forearms, and cylindrical body shape, and the vertebrae have sockets at both ends, which differs from pterosaurs.

Dr. Stephen Poropat said, finds seem smaller in their physical appearance but brought an immense knowledge about what type of dinosaurs were roaming during the early Cretaceous period in the Australian Continent.

They are kind of unusual creatures amongst dinosaurs as they have teeth at an early age but as they get into their adult age the teeth transform into a long beak. This finding indicates the dietary transformation throughout their lifetime.

Dr poropat stated, discovery is a remarkable but incomplete picture of a great discovery, more discoveries of fossils may help portray a  better picture of the lost world.