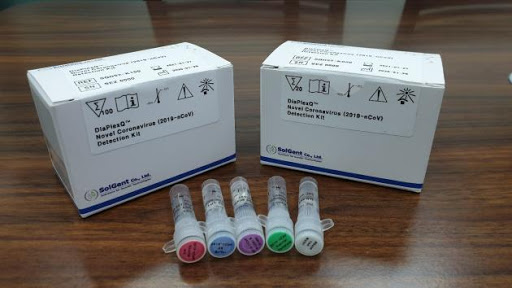 The Coronavirus pandemic has spread all over the world and it has gripped all the world in its hand. Iceland has been tested for being the most infected country with the virus. The testing rate is almost 135 per 1000 people which are partly down to a partnership that involves a company conducting tests on people with or without Covid-19 symptoms. Many countries have banned together to increase market power, testing, and medical equipment. The test which is used to determine the Covid-19 is highly complicated so it is broken in two tests, Determination testing & Antibody ( Serological) Testing.

The most common way to diagnose the virus is Polymerase Chain Reaction (PCR) which works for both symptomatic and asymptomatic people.

The sample is collected by inserting a specialized sterile swab into the patient’s nasal cavity which is used to collect the sample at the nasopharynx, the upper part of the throat behind the nose. In this part, there are many chances to find the virus. The healthcare workers who collect the sample wear personal protective equipment to avoid the infection.

After Collecting the sample, the Swab is placed into the Vial Medium. Many PCR testing is still done by transferring the sample swab to the lab for diagnosis, but the recent and newer tests allow for sample collection and testing to take place at a site, and results are available in hours.

In the lab, Chemical reagents are used in two steps. First to extract the genetic material of Coronavirus from the liquid of Viral Transport Medium. Secondly– The isolated Material is then combined with other chemicals to replicate pieces of the Coronavirus into high enough concentration to test against the virus.

Antibody tests are different from the nasal-swab diagnostic test which shows the active infection. They are actually blood tests that are done to diagnose which part is infected by virus and which part can be immuned. Antibodies are disease-fighting proteins that are formed in days or in weeks after the infection which is produced to protect the body from being infected again.
There are two types of Antibodies which are Immunoglobulin M (Ig M) and Immunoglobulin G (IgG). The body produces Ig M Antibodies for the initial attack against the infections. IgG Antibodies are produced slowly and retrain longer.
There are two formats for Antibody testing Using a small kit that is cheaper to produce and give results in minutes while the other one is lab settings which are considered to be more accurate. The kit formats include a finger-prick blood sample and simply give a positive or negative result for two kinds of antibodies produced throughout to respond to the virus.

Firstly, A patient blood sample is placed in the reservoir, after that, a buffer solution is added to the “break open” membrane structure in the blood. An indicator strip will signal the presence of Antibodies within minutes