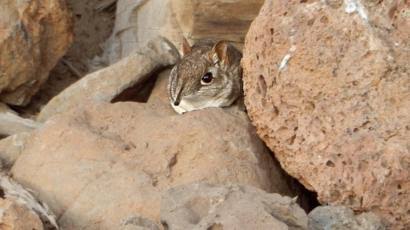 A small-mammal identified with an elephant yet as little as a mouse named Elephant shrew has been rediscovered in Africa after 50 years of anonymity.

The previous scientific record of the “lost species” of elephant shrew was during the 1970s, in spite of nearby sightings.

The animal was discovered alive and well in Djibouti, a nation in the Horn of Africa, during a scientific tour.

Elephant shrews, or sengis, are neither elephants nor shrews, yet identified with aardvarks, elephants and manatees.

They have particular trunk-like noses, which they use to devour bugs.

There are 20 species of sengis on the planet, and the Somali sengi (Elephantulus revoilii) is one of the most strange, known to science just from 39 people gathered decades prior and put away in historical museums. The species was previously known distinctly from Somalia, henceforth its name.

Steven Heritage, a scientific researcher at the Duke University Lemur Center in Durham, US, and a member from the scientific exploration to the Horn of Africa in 2019, said he was excited to put the species “back on the radar”.

He told the BBC: “We were really excited and elated when we opened the first trap that had an elephant shrew in it, a Somali sengi.

“We did not know which species occurred in Djibouti and when we saw the diagnostic feature of a little tufted tail, we looked at each other and we knew that it was something special.”

The researchers had heard reports of sightings in Djibouti, and Houssein Rayaleh, a Djiboutian research environmentalist and conservationist who joined the expedition, believed he had seen the creature previously.

He said while individuals living in Djibouti never considered the sengis to be “lost”, the new study turns the Somali sengi  into a scientific community, which is esteemed.

“For Djibouti this is an important story that highlights the great biodiversity of the country and the region and shows that there are opportunities for new science and research here,” he said.

The team set in excess of 1,000 snares at 12 areas, teasing the snares with a mixture of nutty spread, oats and yeast. They got one of the animals in the first trap they set in the dry, rough landscape of Djibouti.

Altogether, they saw 12 sengis during their trip and acquired the first-ever photographs and video of live Somali elephant shrews for scientific documentation.

They didn’t watch any quick dangers to the species’ territory, which is distant and a long way from cultivating and human developments.

The wealth of the species appears to be like other elephant shrews and its range may reach out past Somalia into Djibouti and potentially Ethiopia.

The Somali sengi is one of the 25 “most needed lost species” of the foundation, Global Wildlife Conservation.

“Usually when we rediscover lost species, we find just one or two individuals and have to act quickly to try to prevent their imminent extinction,” said Robin Moore.

“This is a welcome and wonderful rediscovery during a time of turmoil for our planet, and one that fills us with renewed hope for the remaining small mammal species on our most wanted list, such as the DeWinton’s golden mole, a relative of the sengi, and the Ilin Island cloudrunner.”