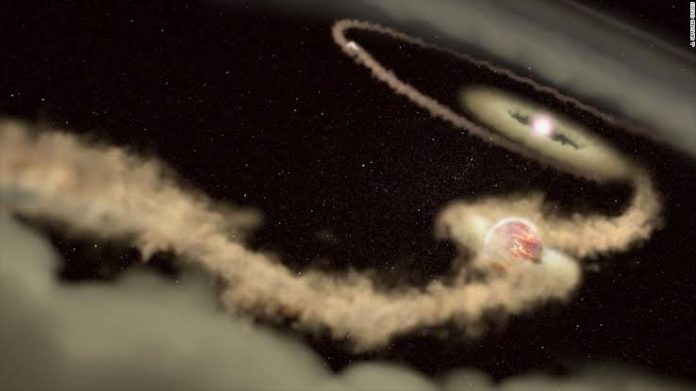 The first image of a multiplanetary system in space pivoting around a star as like our solar system‘s sun has been grabbed by the European Southern Observatory.

The picture was captured through the observatory’s Very Large Telescope, which is arranged in Chile’s Atacama Desert and has been touted as the “world’s most remarkable optical instrument.” It is truly made out of eight different telescopes — four gigantic and four little — that can be used self-sufficiently or merged together to get one specific picture.

The image shows a star around 300 light-years away and 17 million years old that has been titled TYC 8998-760-1, as demonstrated by an ESO news release. Alexander Bohn of the Netherlands’ Leiden University, who drove the assessment into the star, called it “a very young version of our own sun.”

“The possibility that future instruments … will be able to detect even lower-mass planets around this star marks an important milestone in understanding multi-planet systems, with potential implications for the history of our own solar system,” Bohn stated.

“This discovery is a snapshot of an environment that is very similar to our solar system, but at a much earlier stage of its evolution,” Bohn expressed, including that viewing these faraway stars and planets would be pivotal in the constant search journey for space conditions fit for supporting life.

The image furthermore reveals two exoplanets — which implies planets hovering around a star other than the sun — and they have been named TYC 8998-760-1b and TYC 8998-760-1c. The two planets are suspected to be gas mammoths, a term used to insinuate planets basically made out of helium and hydrogen, for instance, Jupiter and Saturn.

The VLT moreover got the essential image of an exoplanet in 2004, yet the new picture is an accomplishment as the first event of space specialists‘ viewing more than a singular planet revolving around a star.