The red-brown colored Blood Falls in Antarctica are named for their bizarre shade, however what they’re truly made of–and why the water streams at a particularly cool temperature–has for some time been a mystery.

Blood Falls, named for its red color, isn’t indeed a spout of blood from some concealed injury.

The  hue was at first credited to red algae, yet a research in the Journal of Glaciology has revealed its actual birthplace utilizing radar to check the layers of ice from which the stream pours.

The revelation came because of a group of researchers, including National Geographic arising explorer Erin C Pettit.

Situated in Antarctica’s McMurdo Dry Valleys, the falls pour ahead from Taylor Glacier, and the liquid bubbles up  from crevices in the glacier‘s surface. The river was beforehand a mystery, as the mean temperature is 1.4 degrees Fahrenheit (- 17 degrees Celsius) and minimal glacial softening can be seen at the surface.

Imaging from under the icy mass settled the mystery, uncovering an complex organization of subglacial streams and a subglacial lake—all loaded up with salt water high in iron, giving the falls its rosy color.

As per the investigation, the composition of the saline water clarifies the way that it streams rather than freezes.

“The brine remains liquid within the subglacial and englacial environments through latent heat of freezing coupled with elevated salt content,” the study explains.

The lake under the glacier has an abnormally salt consistency, and because of low freezing point of saltwater as compared to pure water and expels heat as it freezes, it softens the ice, empowering the rivers to stream.

This implies that the icy mass can uphold streaming water and furthermore that this is the coldest glacier on Earth with continually streaming water—however this water is so loaded up with iron that it appears something that is completely different. 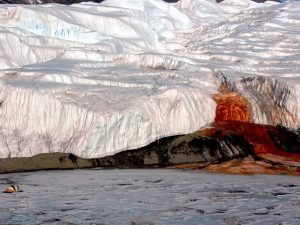 The study likewise estimated the measure of iron-rich saline solution in the river water and found the brine water content expanded as the estimations moved closer to the falls.

Water temperature and saline solution content were also discovered to be connected: Cracks of different sizes in the ice sheet let brine water into the glacier. At that point the saline water starts to freeze, and the latent heat warms the ice around it, increasing the brine concentration in the center of the bcracks.