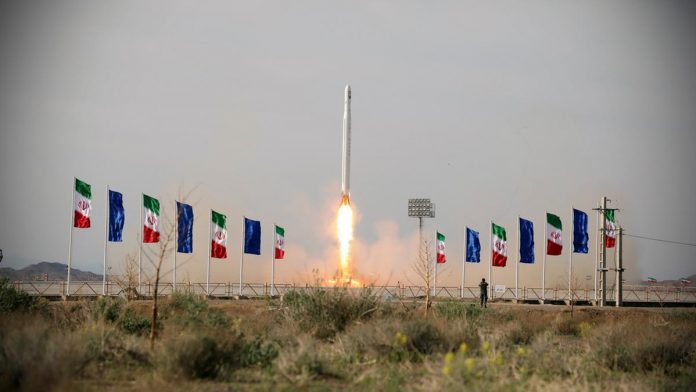 As per Iran’s Revolution Guard Corps (IRGC), it has launched a military satellite into the orbit after many unsuccessful attempts.

Narrative states, the launched satellite which is named ‘Nur’ set a foot on the orbit of approximately 425 Km after being carried by the Qased launcher.

So far, Iran has had many attempts of launches previously but got unsuccessful.

After the attestation of this successful launch, it can pose a stressful situation between the US and Iran.

A few hours later, the US president’s tweet surfaced with alarming statements. In that, Donald Trump directed the US Navy to ruin all the Iranian gunboats if they seem to harass the US Navy ships at sea.

He seemed to be pointing out towards the Gulf incident, which happened a week ago, in which the US stated, 11 IRGC Navy ships consistently had Harassing approaches of six US Navy and Coast Guard ships.

In response, Iran blamed that earlier this month, the US Navy had choked the route for Iranian ships.

Iranian military forces’ representative censured the US President for his tweet, stating that the US should focus on their internal issues despite bullying others. And should concentrate on saving the corps of armed forces that have been affected by COVID-19.

Moreover, the two of the countries reached the edge of war in January this year, when IRGC general was killed in a drone hit by the US in Iraq. In a severe response, Iran shot a ballistic missile at Iraqi military bases hosting by the US.

Getting back to the main point, IRGC stated the launch of a satellite on Wednesday would be a ‘great achievement’ for Islamic Iran in the field of space.

In a tweet he stated:
“Part of Iran’s peaceful [space] program is civilian which is pursued by the government, while another part is for peaceful defense purposes and naturally carried out by the armed forces.”

There were no such remarks revealed from Trump’s administration. But, it has exposed problematic concerns in previous time that technology which was utilized in launching a satellite could lead them to come up with intercontinental ballistic missiles (ICBMs). This consequently will lead to the UN Security Council Resolution’ breach.

Iran has refused to violate the UN Resolution. As it has already made it clear that its space program is completely a peaceful program and it has nothing to do with the development of any nuclear weapon.